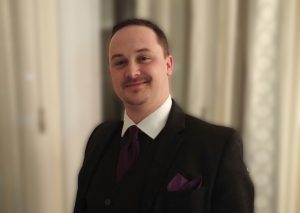 Hi – I’m Joel.  I was born in Louisiana, grew up on the Mississippi Gulf Coast, and currently reside in Birmingham, Alabama with my wife Megan, our daughter Addison, our dog Mac, and several beloved house plants. When I’m not at my desk working, I’m either spending time with my family and friends, on my Harley, or plopped uselessly in front of an Xbox or a TV – most likely with either the latest blockbuster game, or an 80’s movie on.  I’m an avid musician, with decades of piano, guitar, and numerous other instruments under my belt.  And for listening – well, once again, leave it to the 80’s to give me a non-stop supply of nostalgia.  I’m also a competent home chef – to me, food is art – and I love to paint with that particular brush.

I’ve been a nerd since I became self-aware.  I fell in love with computers at the age of 5, when my parents gave me an IBM PC Jr.  With a whopping 16k of RAM, no hard drive, and a BASIC language cartridge, I got hooked.  This was going to be my career.  By 7 years old, I was coding simple programs in BASIC, making the computer keep my journal, or make a shopping list.  During my younger teenage years, I ran a very successful and popular BBS (bulletin board service) – the precursor to the internet.  And, once DataSync opened it’s doors in 1995 on the gulf coast, I was dialed in (literally) and online for good.

The internet absolutely fascinates me.  To think that we can literally generate, harness, shape, and control a series of sub-atomic particles, and send them around our planet and back to us at will in less than one second is astounding.  Not only that – but that we can move exabytes of data across Earth each day – from Uber rides to our favorite Amazon items, to literally – instant – messages.  I was there with a front-row seat for the birth of the internet, and I wouldn’t trade that for anything.

I’ve developed a number of industry-specific skills over the years, from web design and development to programming in multiple languages, to cybersecurity and VoIP applications – I’ve pretty much seen and done it all.  I love my work, and I’m very good at what I do.  So if you’re here because you need an I.T. guy, there’s a ‘contact’ link at the bottom.  As for the rest, there’s a page for each major discipline I practice, so feel free to browse – and thanks for visiting.